Art Of Slating is a family run business which has been within the Collyweston Slate trade for over 23 years and has had many links with English Heritage and The National Trust.

If you would like to find out more about our services or discuss your requirements, you can phone us on 01780 592941 or email us at john@artofslating.co.uk and we will be happy to assist you. 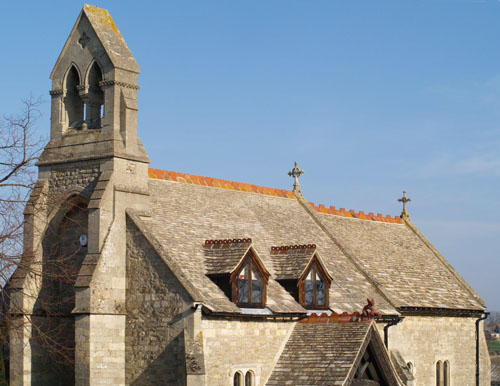 Restoration of Roof completed on Church by Art of Slating

Stone Slates have been used for Roofing in Britain since Roman Times.  Wherever a rock could be split to form a reasonably thin slab it has be exploited for Roofing.  Until the second half of this century, Stone Slates were quarried or mined extensively throughout Britain and although most quarries were small locality, collectively they formed a significant industry. 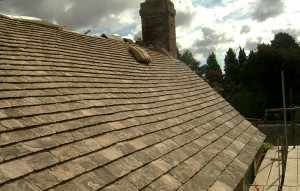 Stone Slates were mined at Collyweston in Northamptonshire. Access to the fissle rock was by adits or shafts with the rock worked along galleries.  With Collyweston Slate the splitting was carried out by frost action.  The block was either stored under ground or taken to the surface where it was wetted and covered in earth until the frost came.  The frost then swelled the natural moisture within the block and split into Slate.

Stone Slating is a specialist activity and not all Roofing Contractors are either familiar with the particular methods involved or skilled in the local Roofing tradition.  In many area’s of the country including Collyweston, the scarcity of Stone Slates and the decline in their use has resulted in the loss of traditional skills and care should be exercised when selecting a suitable contractor.  Contractors should be familiar with Stone Slate Roofing in the region and be prepared to supply photographs of work they have carried out.

Outstanding quality, would recommend to anyone.

Thank you for a great job, would you please come back next year to do the front roof.